What is Soybean Milk-Fermented Product (SFP)?

Soybean milk-fermented product (SFP) is a functional food made from 12 strains of lactic acid bacteria and 4 strains of yeast on a soybean culture medium. 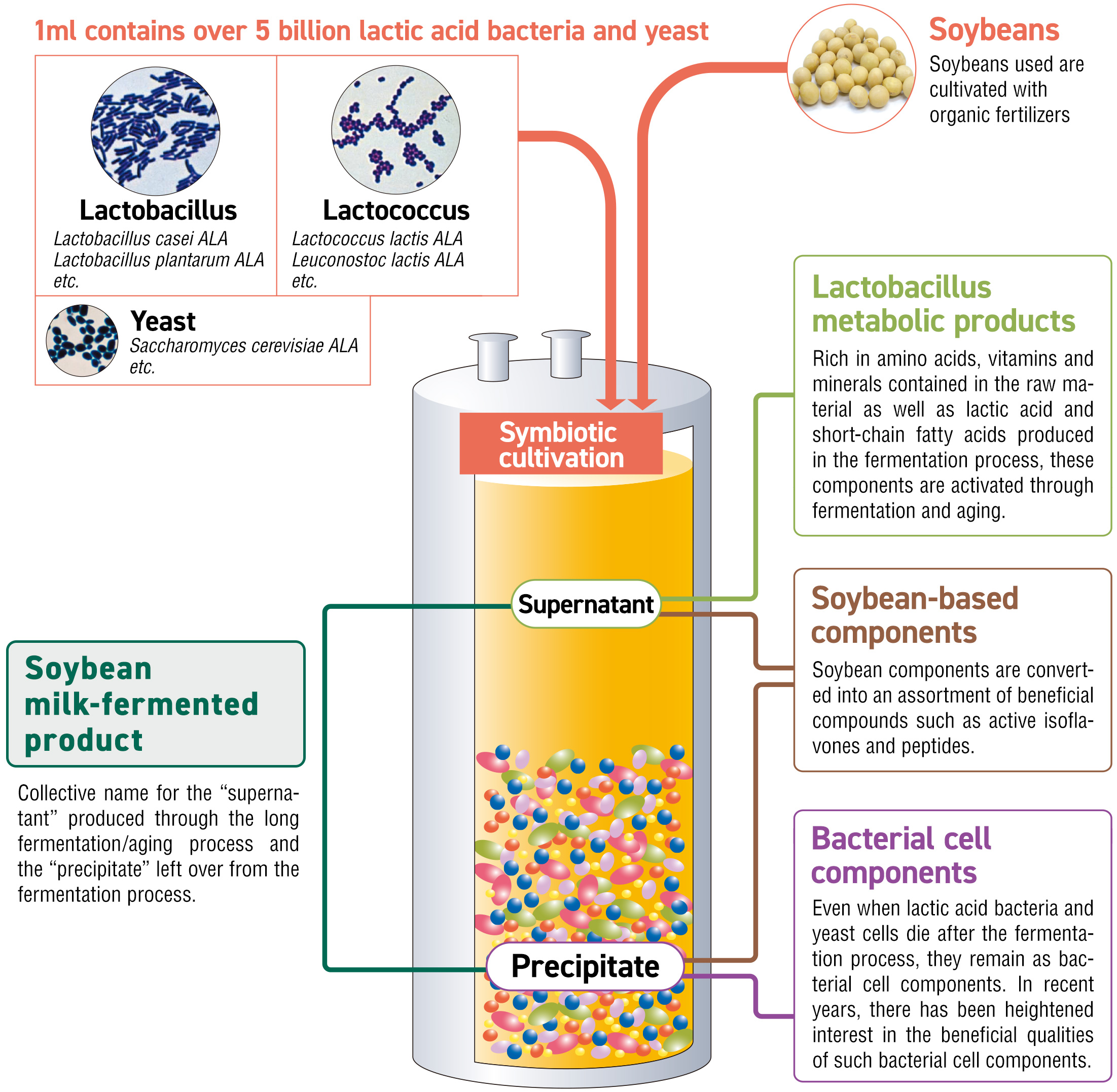 Mimicking a healthy-state intestine within a tank

Human beings are able to maintain their health first and foremost because enteric bacteria produce nutrients that human beings cannot create on their own within the fermentation tank called the large intestines in the human body. If fermentation conditions in the large intestines are poor, the whole process becomes a process of decay, which can lead to a variety of diseases.

That is why it is more effective to consume “soybean milk-fermented product,” which is the metabolic product of lactic acid bacteria that have already fulfilled their roles within the tank.
Because ALA’s soybean milk-fermented product is a fermented liquid made from symbiotically cultivating several strains of lactic acid bacteria and yeast, it is close to the state of a healthy-state intestine, replicated within a tank. 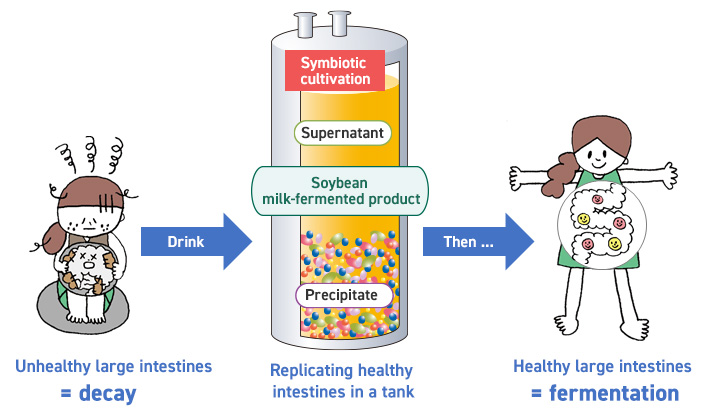 What is symbiotic cultivation?

Yogurt is generally fermented using 1~3 kinds of bacteria. Meanwhile, soybean milk-fermented product uses 12 strains of lactic acid bacteria and 4 strains of yeast.
Because bacteria generally tend to struggle for power over other bacteria as they proliferate during the fermentation process, it is extremely difficult to cultivate multiple bacterial strains in the same culture.
The “symbiotic cultivation” method is a biotechnology that makes this possible.

What is important is that all bacterial strains remain alive to feed off of the nutrients in the culture for as long as possible in order to produce as many metabolites as possible. The presence of a conspicuously proliferating bacterial strain can cause other bacterial strains to not be able to proliferate before the fermentation process ends, thereby resulting in a fewer variety of metabolites.
At ALA, 16 strains of bacteria, carefully chosen based on their different traits, are fermented over a period of approximately 100 hours. 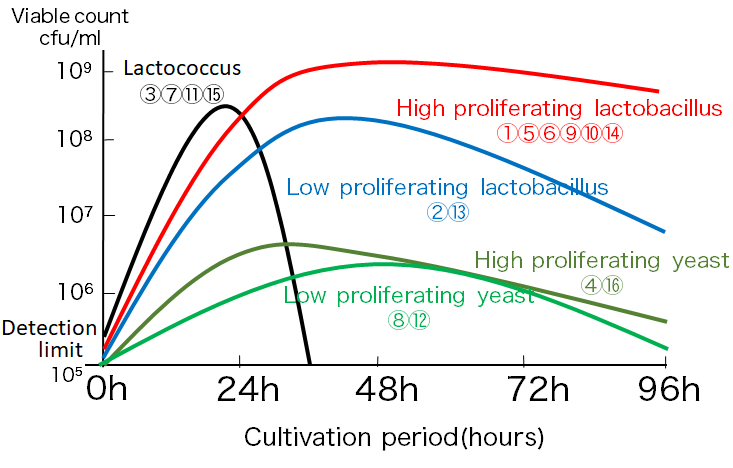 The Use of Soybean Milk (Soybeans) Over Milk

Health foods comprised of lactic acid bacteria, such as yogurt, generally use animal-based milks. However, one of the distinct features of ALA’s soybean milk-fermented product is that it uses soybean milk for its culture.
Soybeans, called “the meat of the fields,” are high in proteins and low in calories. They are also rich in various functional ingredients such as soybean isoflavone, which are noted for their female hormone-like functions.
The isoflavone incorporated in the ALA Corporation’s soybean milk-fermented product is furthermore converted into aglycone-type isoflavone, a more active form of isoflavone, in the bacterial decomposition process. Biotechnology further helps to draw out the full power of soybeans. 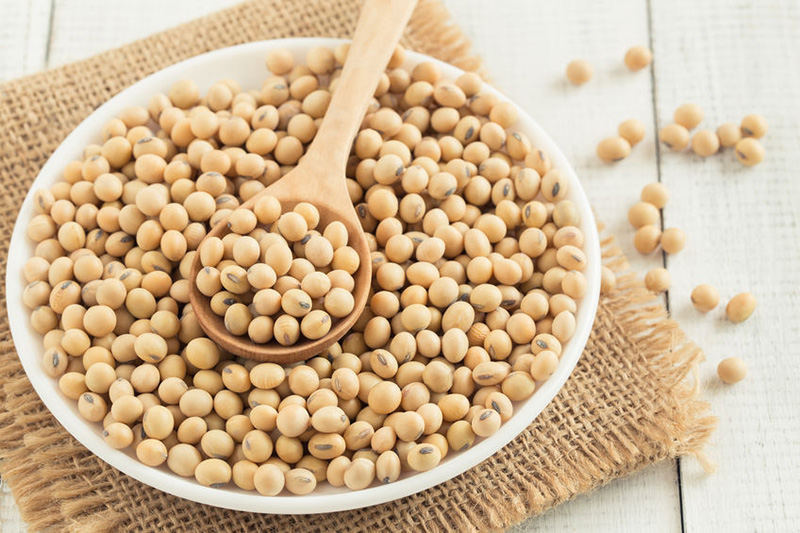 What are bacterial cell components?

Calculation based on a typical cup of yogurt (100g), which contains 10 billion lactic acid bacteria. 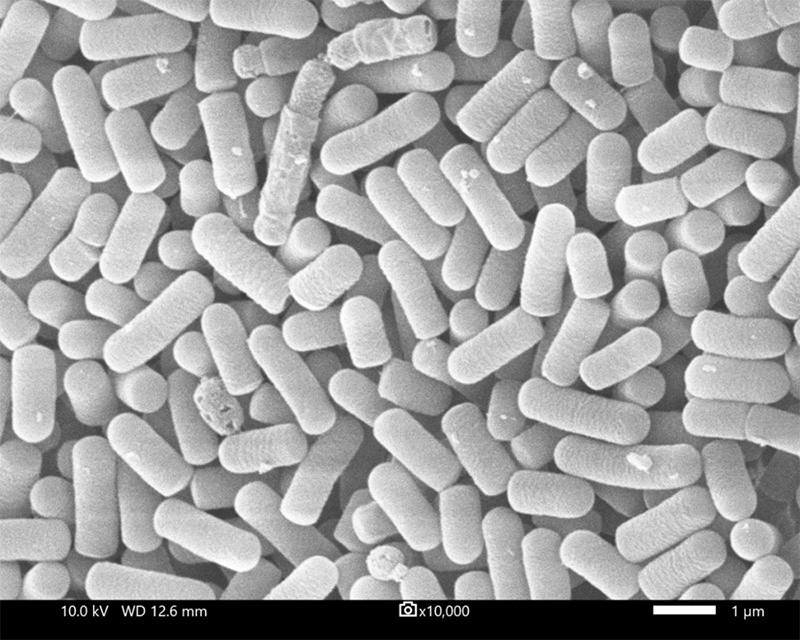 About our bacterial strains