Frontiers in Cellular and Infection Microbiology

Periodontal disease develops as a result of oral microbiota in dysbiosis, followed by the growth of periodontal pathogens such as Porphyromonas gingivalis and Prevotella intermedia. In case of acute symptoms, antibacterial agents and disinfectants are administered, however the appearance of drug-resistant bacteria and allergies cause problems. In recent years, studies on the effects of probiotics have been conducted as an alternative therapy for periodontitis. However, the basic mechanism of the inhibitory effect of probiotic bacteria on periodontal disease has not been clearly elucidated. To clarify the antibacterial mechanism of probiotics against periodontal pathogens, we used Limosilactobacillus (Lactobacillus) fermentum ALAL020, which showed the strongest antibacterial activity against P. gingivalis and P. intermedia among 50 screened lactic acid bacteria strains. The antibacterial substances produced were identified and structurally analyzed. After neutralizing the MRS liquid culture supernatant of ALAL020 strain, the molecular weight (m/z) of the main antibacterial substance separated by gel filtration column chromatography and reverse phase HPLC was 226.131. This low molecular weight compound was analyzed by LC-MS and disclosed the composition formula C11H18O3N2, however the molecular structure remained unknown. Then, structural analysis by NMR revealed C11H18O3N2 as the cyclic dipeptide, “hexahydro-7-hydroxy- 3- (2-methylpropyl) pyrrolo [1,2-a] pyrazine-1,4-dion cyclo (Hyp-Leu) “. Based on the results of this analysis, cyclo (Hyp-Leu) was chemically synthesized and the antibacterial activity against P. gingivalis and P. intermedia was measured. The minimum inhibitory
concentration (MIC) was 2.5 g/L and the minimum bactericidal concentration (MBC) was shown to be less than 5 g/L. In addition, an in vitro epithelial tissue irritation test at 10 g/L showed no tissue toxicity. So far there are no reports of this peptide being produced by probiotic bacteria. Furthermore, antibacterial activity of this cyclic dipeptide against periodontal disease bacteria has not been confirmed. The results of this study might lead to a comprehensive understanding of the antibacterial mechanism against periodontal disease bacteria in future, and are considered applicable for the prevention of periodontal disease. 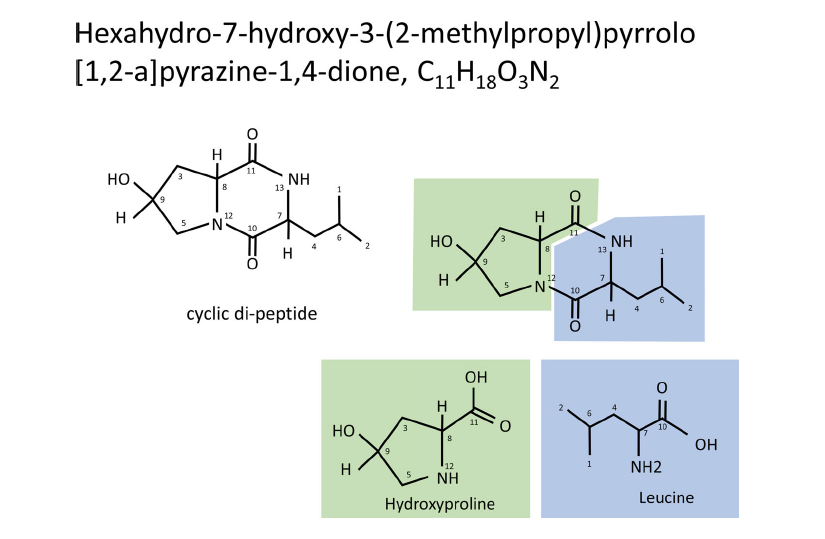